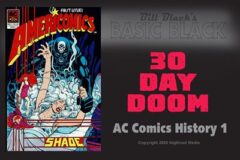 Bill Black discusses the labor involved in the early (1983) days of Indy comic book publishing. Pre-digital comics with mechanical color separations required a lot of time-consuming work and were very expensive to produce. This entry, the #) Day Doom, is the first in a series concerning the

When a reader picks up a comic book they first see the art then read the story. Little thought, if any, is given to the process of what it takes to physically produce the book. This segment of the History of AC Comics will focus not on the editorial aspect of publishing but the physical labor and equipment involved in the manufacturing of a comic book.

Most publishers create editorial content and pass everything else on to their printer. That is expensive. The primary reason, other than insanity, for the incredible longevity of AC is that all the grunt work was done in house. Whereas publishers have office staff… secretaries, proofreaders, office assistants, accountants, and so forth…. At AC Comics, all editorial duties and pre-press production were done by two men: Bill Black and Mark Heike. Rebekah Black worked in the office, too, and Christie Churms did also for a couple of years, but the lion’s share of all production was done by two men.

Black worked on his high school newspaper as Art Director and columnist. Mrs. Hill, who taught the publications class at Winter Park High School, had secured a sweet deal with the city newspaper, The Winter Park Herald: one page a week would be devoted to the high school paper. So Black gained hands-on experience and was actually published during his senior year.

At Florida State University Black majored in advertising design and learned the basics. More importantly, he aligned himself with Bill Killeen, editor, and publisher of the guerilla college humor magazine, THE CHARLATAN. As a cartoonist and later Associate Editor, he learned at Killeen’s elbow, every step of physically assembling a magazine.

This experience came into play in later years when Black started his own Paragon Publications. Those books were produced in his spare time while working at various full-time jobs in advertising and film production. As a photographer, he learned to work with speed and economy. At his last position (1978-1982) as one of 5 on the production staff, an astonishing 200 films were produced each year.

When the corporate office pulled the plug on film production, Black was suddenly unemployed. Fortunately, he had the Paragon books to fall back on. Indy comics were just starting up and David Scroggy, a Paragon reader who headed Pacific Comics, urged Black to go national. At that time all comics (Marvel, DC, Archie, etc.) were printed at World Color Printing and their minimum run was 50,000 copies per book. That was not an option.

Chuck Yates, who’s father owned a local print shop, had been printing flyers and such for Paragon. He hooked up Black with a big web press outfit in Ocala, FL, which was 80 miles north of Black in Longwood. They agreed to print color comics for Black. Yates came on board as a business manager and Americomics was formed.

At that time comic book distributors came into being. They distributed not to news dealers as did Marvel and DC but rather directly to comic book stores on a non-returnable basis. A credit line was established. Printer shipped to distributors, distributors paid Black and Black paid the printer.

That’s the setup. Bill Black was on-site, observing, every time a book was printed. With his background in graphics, he knew he could do most of the pre-press work himself once he bought the equipment. When the Indy Comic Book industry crashed at the end of 1983, that’s exactly what he did. It was a matter of survival. It always is.

In the warehouse of his Longwood office, Black constructed a make-shift darkroom. He purchased a huge process camera and did all the camera work from that point on. This camera was about 5 feet high, 6 or 7 feet long and 3 feet wide. The comic art, size 11” X 17”, was positioned on the camera platen. The camera was then set to reduce the art to print size and a photostat negative was loaded at the back end of the camera. All this was done in darkness with a red safelight that did not expose the film. The negative stat was coupled with a positive sheet and run thru a developer. This produced a print size B&W positive line art stat. The stat would then be washed to clean off developing chemicals and hung up to dry. The warehouse was not air-conditioned and the darkroom had no ventilation. Because of the Florida heat, Black would strip down to shorts to perform this task. Using this system, Black shot every stat produced for AC Comics between 1983 and the digital age, literally thousands and thousands of images.

Once the stats were created they had to be pasted up on flats four up in the proper pagination order. A 32-page comic was comprised of two 16 page sections printed on a big web press. Printed on gigantic rolls of paper, the comic would feed through four stations, one for magenta, blue, yellow, and black ink, weave together and come out a folded 32-page book.

For this to read in the proper order, the flats were assembled in a specific way so that page 1 would print opposite page 32 and on the reverse side page 2 would print opposite page 31 and so forth. Each flat had the base art (four pages that would print black) and 9 overlays which would print as a combination of 100%, 50%, and 25% of magenta, blue and yellow. This would yield a range of 64 colors which had been the comic book standard for decades. All of these overlays were photographed on large negatives, stripped up and burned on to metal printing plates. To print correctly, all colors had to be registered. On a web press, it took a good deal of time and a lot of wasted paper to get all 32 pages in registration.

The pre-press work involved creating overlays on sheets of clear plastic (9 per flat, 3 tones for each color). The industry standard for doing this was to cut sheets of rubylith which was very costly and incredibly time-consuming. Black learned that this could be done cheaper and faster by coloring in proper areas with a red retouching pen. Still, it was a painstaking, time-consuming task to color a book.

The person who did this was called a color separator. A B&W line copy of each page would be hand-painted in watercolors to the desired palette. The colors would then be coded creating a color guide. The codes would denote on which plastic overlay should be colored in. To create an “orange” cape, the color separator would color in the cape area on both the 100% yellow overlay and the 50% magenta overlay to get the desired color. Look at any pre-digital color comic and imagine how much work was involved in coloring each page!

During 1983 AC Comics had employed several color separators. After the market crash, the separations were done by either Rebekah Black, Christie Churms, Black himself, or anybody else the editor could rope into doing it. Black and white books were toned using the same method employing 50% and 25% gray tones.

All this was very costly in man-hours, equipment, and supplies. The digital age marked the end of this old school printing technology. Still, it should be recognized by AC Comics readers what AC went thru to deliver a book every month. And if a book wasn’t completed in 30 days, the whole house of cards collapsed. The 30 day doom!