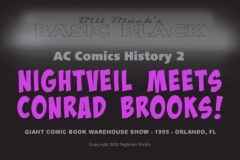 Here’s something that nobody else has seen. AC Comics was set up with David Sanford’s TRI-CITY GAMES at the GIANT COMIC BOOK WAREHOUSE SHOW in Orlando, FL in 1995 to promote the SUPERBABES Role Playing Game. David put up a huge display and made room for a few AC Comics’
Artists, Chris Allen, Mark Heike and Nick Northey. He also brought in, from Texas, Mary Capps to appear in costume as NIGHTVEIL. In addition Charlotte Foster was decked out as COLT, the Weapons Mistress. The famous guest star of the show was Hollywood actor, CONRAD BROOKS, of PLAN NINE FROM OUTER SPACE fame.
I was there shooting video with a VHS camcorder so the picture quality is not so hot. Still this a good glimpse of the times as it happened 25 years ago.
Mary’s excellent NIGHTVEIL costume was commissioned by Steven Johnson for the 1994 San Diego Comic Con Costume Contest where she appeared as the mystic mistress. During another Florida event to promote SUPERBABES RPG I shot the NIGHTVEIL origin story using the same VHS camcorder. Later that film was transferred to digital and new footage was added to make the feature NIGHTVEIL: WITCHWAR, the first Nightveil Media release.
Also seen in this 1995 video is Frank Dowler who at the time owned the Enterprise 1701 comics shop, the largest in Orlando; Ben Smith, an AC writer who penned the first AC NIGHTVEIL story in FUN COMICS No. 4; Joel Kilmer (AKA CAPTAIN JOEL, BUNNY HUNTER) a long time friend and AC Comics supporter who has a South Florida comics shop; Cam Verkaik, co writer/creator of the SUPERBABES RPG; and, spotted in the background, Mike Acord with wife Sue and new-born son, Ben. Mike went on as an actor to star in several Nightveil Media movies and to create our favorite Horror Host, LON MADNIGHT. Sue made several NV Media costumes including SYNN and STORMY TEMPEST.
Also at this time Mark Heike had landed us a freelance inking gig at Dark Horse working on STAR WARS TALES OF THE JEDI series. Chris Allen was using the pen name David Jacob Beckett and the three of us collaborated on many books in that series. In this vid Mark explains this to STAR WARS fans.
BATGIRL also makes a guest appearance. She along with NIGHTVEIL and COLT ham it up with CONRAD BROOKS and Joel Kilmer. You can see we had a lot of fun at these shows.